Fall is my favorite season, partially because layering my clothes is a hobby. Mostly because I get a pause in the costuming schedule to remember that I have a plethora of other hobbies. But, this post is about what I did to end the 2014 season, so let’s look back.

First, I got a new sewing machine–the Singer Heavy Duty. I needed a new primary, since my older Singer has become unreliable, and I don’t want to have any unfortunate accidents with my pretty little Brother. The new machine, Jayne, has been lovely. I was concerned that she’d be too sturdy for my mid-size sewing table, but I haven’t had any issues. 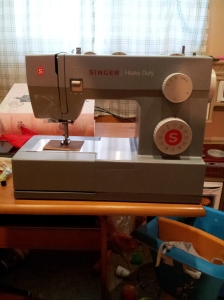 Late September’s events began with the local fairy festival for the Little Princess and me. Despite the silly number of wings we each already have in the house, the LP wanted to wear an off-the-rack “Green Fairy” costume, so I indulged her with new cellophane wings for both of us. I was a pirate fairy. Frolicking in an enchanted forest happened. It was a magical time for everyone. 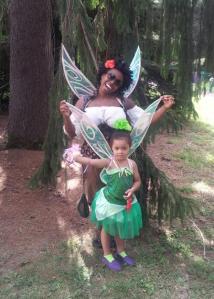 Later that day, I transformed into a dancing pirate for the annual pirate-themed hafla. Good times were had.

Later that week, we had an event for National Comic Book Day at my office, complete with a cosplay contest. I decided to do the second half of an original Frozen/DC mash-up by my friend at belle la vie, as the Anna Quinn to her Poison Elsa. 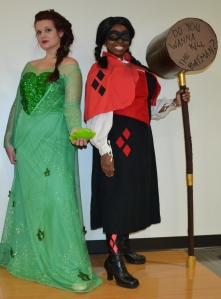 The project took less than ten hours–most of that being painting time for the mallet. The half cape and bodice were draped and sewn over two nights. The shirt and skirt were existing, and I added the diamonds with fashion tape. The mallet is a combination of floral foam, EVA foam, craft foam, cardboard tubes, bias tape, and a wooden pommel that was originally a decorative mug. This was my first Harley Quinn, and I feel like I can cross it off my cosplay achievement list.

The following weekend brought the RHPS Video Game Show. As per previous events, the audience was encouraged to dress up for the costume contest. I managed to pull a win with this Assassin’s Creed variation. 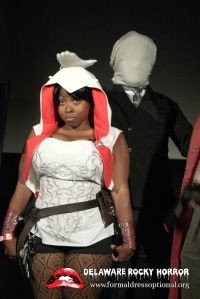 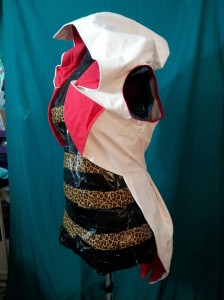 The jacket took a couple of hours from draping to finishing. The white exterior might be waterproof, and I had just enough for this one day project. It’s lined with the wrong side of some kind of red [not-]silk in the hood, collar, and coat tails. The collar and armscye are piped with a braided red selection from a Jomar haul. The strapless top was a gift to which I added corset lacing. I wore black hot pants and fancy fashion tights with brown boots, belt, pouch, and my daughter’s bracers.

The cast member playing Janet borrowed my Zelda costume, so I made some updates to the vest and gloves and added a hair clip and new crown gem out of clay. I’ve never worked with clay before, so I was pleased that the pieces made it out and back the way they started. There was a lot of glue involved. 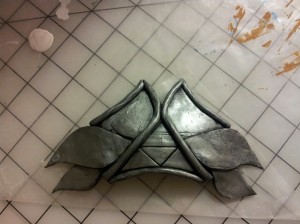 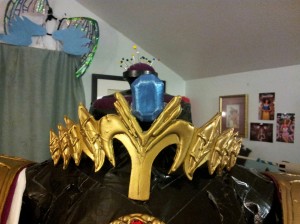 The final week of September was devoted to the LP’s Queen Elsa gown. Over the summer, I’d picked up a glittery blue for the main fabric, blue lining, and blue tulle for the sleeves and train. I did some flat pattern drafting for this, based upon her last rennie gown that I made. My mom came in the day before the party to do the finishing and add stick-on snowflakes. The LP also wore the gown for Halloween, so here’s that shot, with the addition of a fleece shrug I made for the chilled weather. 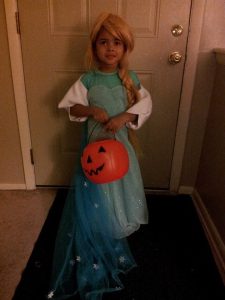 The second half of September was pretty busy for my craft room, but she didn’t get a break in October. To Be Continued…

Hobby costumer, wife, and mom with a dancey-dance problem and a hankerin' for nerd makeup View all posts by SciFiCheerGirl 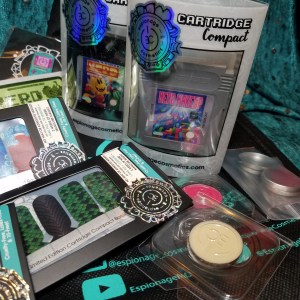