Let’s see…as of the last post, I had small projects loading up my work table. Here they are, in no particular order.

A friend and I completed a full set of wings for the bride and attendants in her wedding. They were awesome! I’m not going to do a full write up on them, but I am so happy that we did it. I cannot wait to make some for fantasy costumes.

Related to the wedding, another bridesmaid donated her wedding gown to my stash. In return, I made a “something old” gift for the bride from all of us and a keepsake pillow for the donating bridesmaid. 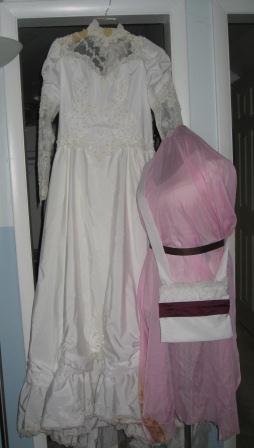 Two weeks ago, I did a 15 minute project for a friend who works at a grist mill. She wanted an apron for her 18th century work outfit. Again, no full write up. I used a cotten/linen blend remnant from one of my smock projects. The first one I made was longer than she wanted, so I kept that one for my working class ensemble, and made her a wider apron that I’ll hem when I see her. I’ll either tie it with cotton twill tape or the remnant’s selvage. 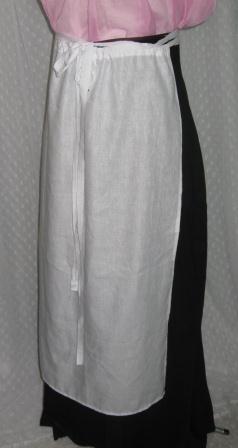 Another friend decided to participate in the Punk Rock Flea Market in Philadelphia. In addition to his own fantastic art, he asked if any of his creative friend types would like to showcase some of their wares at his table. In a feeble attempt to make a dent in my remnant bin, I accepted the offer and made six tablet/e-reader pouches. One sold, and, honestly, it feels pretty awesome. I made the pouches in three styles that I made up as I went along with only items that I had in the stash. Of course, if I didn’t have a full-time job to go to, I could have made a ton more from remnants in that gosh-darned bin.

This week found me working on the final non-faire project of the season–a baby shower gift for a crafty uber-geek friend. I made her a Boppy cover and nursing apron in a girly safari nursery pattern. I’ll admit that I bought extra of the fabric so that my Tiny Princess can travel the shopping carts of the world in style. I plan to get the cart cover completed eventually. 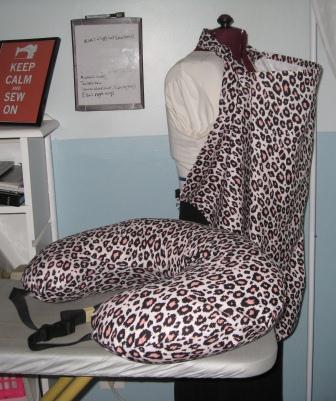 I did a no-sew project this month, but I don’t have a picture for some reason. I made bonus counters for Munchkin (Steve Jackson card game–Google it if you don’t know it), which can be used for a lot of games, in truth. I went through a lot of prototypes to get to the finished product, but I found a book of fairytale card stock that was perfect for the project, making the time spent totally worth it. I stamped all of the numbers myself and used paper fasteners so that the number dials would turn. They’re pretty neat, and I can’t wait to get the gang over for a night of back-stabbing fun!

The husband’s shirt is coming along. I’m up to the sleeves, so I could, potentially, finish this tomorrow.

Speaking of tomorrow, a friend and I are taking a basic knitting class at Joann’s. With some real training under my belt, I hope to make some headway in the scarf I’m making. Confidence in one’s abilities goes a long way toward finishing a project. I can do the garter (?) stitch, which is all that the scarf requires, but I’d like to be able to do it well.

Once the shirt is on the hanger, I’m going to jump right into the slops and try to marathon them out over the course of the week. As always, I’d prefer to power through the projects and have time to breathe that last week before faire. Next weekend, I’ll be making a hat for my mom, and the less I have sitting on my table, the better.

Somewhere in the back of my mind, I would like to visit the NJRF, which is going on this weekend and next weekend. I can’t say that I have a good reason for not going other than not wanting to go by myself. The thing is…I could probably find a handful of individuals who would go and in costume. I’ll ponder it this week and see what I end up with.

I think I’ve updated my small audience enough for now. As always, don’t expect updates more than once a month, but know that I am crafting my butt off!